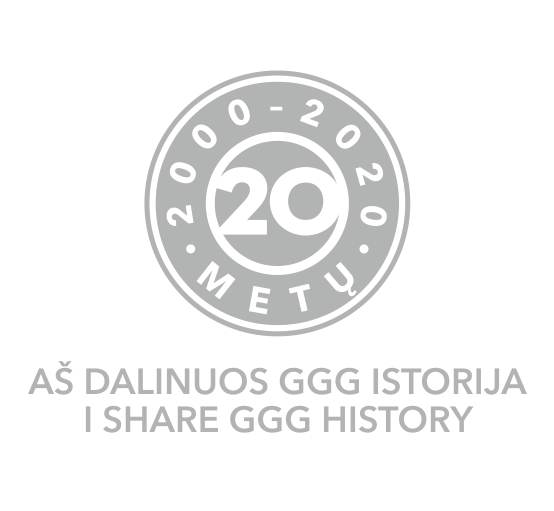 Today, in the column I SHARE GGG HISTORY, we talked to the gunsmith, Ąžuolas Rochmanas.

Somewhere around the 16th century, a gunsmith’s function became the title. According to the hierarchy of officials, the manor gunsmith was the 19th in the Grand Duchy of Lithuania.
What about nowadays, a few centuries later? How important the function of a gunsmith is?

Nowadays, a gunsmith does not have a state title. Perhaps the word specialist would be more appropriate to describe this position. Strange as it may seem, no one professionally trains for this specialty in Lithuania. The function of a gunsmith is very important in areas where weapons are used directly, such as the military, the police, security structures, and ammunition factories. Sport shooters, hunters and gun shops also use the services of gunsmiths.

At Giraitės Ginkluotės Gamykla (GGG), you have been working since 2019. Tell us about your professional path. What goals have you set for yourself?

It has already happened that weapons have accompanied me more than half a lifetime, apart from childhood, when we made homemade pump guns. For the first time, I became closely familiar with firearms on a school bench. In Soviet times, military training classes were held in schools. As I remember, once a year it was necessary to shoot with a small-caliber rifle and to get a grade. After graduating from school, I served in the Lithuanian Army. After serving, I joined the National Defense Volunteer Force and served for 15 years. I worked with weapons in arms trading companies Oksalis (UAB ), Zala Arms (UAB ), Vollit (UAB ), Ginklai (UAB). Moreover, I have been a hunter for over 20 years.

The work of a gunsmith cannot be defined in units, liters, cubes and similar measures, and it would be difficult to set any specific goals. But this specialty requires a lot of knowledge. The main goal would be to constantly improve, and to apply the latest knowledge in GGG.

You are responsible for the armory of GGG weapons, their issuance, acceptance, and storage. What is a typical work day like?

These responsibilities have a certain routine, as production and testing in the ammunition production laboratory take place continuously. Testers constantly need to prepare and clean the ballistic barrels. This work is very important. I give it the highest priority because the workflow of the entire factory depends on it. Each batch of manufactured ammunition is tested with weapons, which need to be prepared for those tests and cleaned after that. It is a painstaking and time-consuming process. My duties also include the accounting of cartridges, primer, primed cases, and gunpowder accounting in the ammunition quality laboratory. These processes are constantly changing, and need to be accounted for on a daily basis.

What categories of firearms do you maintain? What is the oldest weapon we can find in GGG weapons’ armory?

GGG produces military and civilian ammunition for long-barreled rifles, appropriate weapons are required to test these. These are category A and B weapons. Category A includes all automatic weapons and machine guns. These military weapons are not in civilian circulation. Category B includes civilian carbines and semi-automatic weapons. Not all weapons age can be identified without contacting the manufacturer, maybe there are older ones. As far as I know, there are two Kalashnikovs, the oldest, made in the 1950s.

Basically, the specifics of all weapons are similar and complement each other. Military weapons are the most powerful and most reliable. These are designed to work flawlessly in the most extreme conditions. With the increasing popularity of sport shooting in the world, a number of different branches of sport shooting have emerged. For these weapons are manufactured in narrow specialization with ergonomics and precise accuracy. Hunting rifles are manufactured according to the object being hunted, hunting method, conditions and style. There are a lot of calibers, bullet weights, and types.

What weapons are you using to test GGG .308 win and GGG .223 Rem caliber ammunition with?

I suppose that gun maintenance is very important. Let’s talk about gun care resources, their condition when you test GGG ammunition.

Every soldier, shooter and hunter will tell you that a weapon must always be clean. Otherwise, it can get stuck or break at the most responsible moment. And in exceptional cases, a weapon that is not cleaned in time can seriously injure the shooter or even cause his death. Proper weapon and ammunition maintenance significantly prolongs the weapon's service life.

What advice would you give to gun care?

We could talk about this topic extensively. In short, the main stages are:

• cleaning the weapon after shooting,

• regular removal of copper and lead deposits from the inner barrel surfaces,

• cleaning the weapon before shooting.

Imagine, you need to set up an exhibition on the history of weapons. Which exhibits would be your choice and why?

Each weapon is uniquely interesting both in its technical solutions and history. Before or during every major military conflict one archaic legendary weapon sees the world. Afterward, a weapon continues to be improved, its varieties, clones emerge, etc. Such weapons are very interesting in terms of their history and the process of development. GGG armory includes weapons such as MG-3, M-14, M-16, Kalashnikov. If the exhibition were to be installed on GGG armory basis, it would have to include each weapon model used to test GGG-made ammunition.

There are a lot of well-known sayings that mention a weapon. Maybe you can share your favorite idiom?

The best weapon is the one that is next to you at the right moment.

In which area of life, in addition to professional, do you think you are the best? What do you like to do and things you wouldn’t even try?

As I mentioned before, I am a hunter and a fisherman. Sometimes I make a meal from my catch. I am especially good at making meals outside, in nature. Moreover, I like to take photos, and read. What I couldn’t try? I don’t know exactly, maybe I would say, never say never.

And finally, if you had to give a short message to a news portal describing the company's activities, how would it sound?